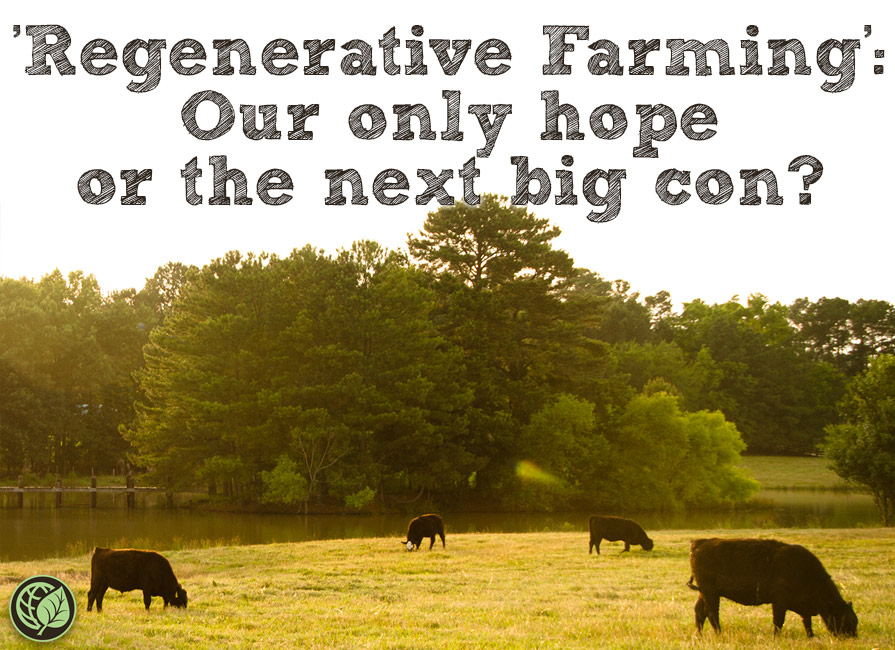 Before I get shot down, let me start by saying that I believe the collection of practices being described today as ‘regenerative farming’ have huge potential to put the brakes on—and indeed reverse—many of the negative impacts of industrial agriculture.

Regenerative farming practices and principles offer solutions to some of the crazy activities that many farmers have been encouraged—or even forced—to partake in. In fact, I’d go so far as to say that the widespread adoption of regenerative farming is essential if we’re going to feed a global population of nine billion people by 2050 while at the same time protecting the soil, water and climate.

For decades, most farmers in the West have been encouraged to spray ever-greater quantities of chemicals to control weeds and insects, in the process creating so-called ‘superweeds’ and ‘superbugs’ resistant to almost all known herbicides and insecticides. In order to meet the ever-growing demand for so-called cheap meat, dairy and eggs, farmers are forced to invest in farming systems that confine billions of animals; where the pain, fear and suffering caused are written off as an acceptable cost. These confinement operations require farmers to feed antibiotics like candy in order to suppress the diseases that would otherwise break out in the dirty and stressful conditions, while the deluge of fecal waste—a toxic concoction of feces, heavy metals, bacteria and pharmaceutical residues—is stored in vast, open-air lagoons and cannot be spread or used without poisoning the surrounding soil, waterways and air.

Over the years, a plethora of marketing initiatives and food label claims have emerged to address (or should I say pacify) the ever-growing public concern about the human health, animal welfare and environmental costs of industrial farming systems. Most of them have done more harm than good.

Take, for example, the “Natural/All Natural” label claim, which epitomizes everything that’s wrong with our food labeling laws. It’s a meaningless food label claim developed by industry to con naïve consumers into believing they’re paying more for better food, making millions of dollars for unscrupulous corporations and retailers that use it. Despite what consumers might think, the “natural” or “all natural” label claim has nothing to do with environmentally friendly farming or how animals are raised. It simply means the food contains no artificial ingredients or added colors, and that it was minimally processed. So the “all natural’ chicken breast you paid a premium for last week almost inevitably came from chickens raised indoors alongside several thousands of other birds, where routine antibiotics and other meds is the norm. The farmer wasn’t paid a cent more, that’s for sure.

Another classic example is the “antibiotic-free” label, which emerged to champion public fears about the abuse of antibiotics in food animal production and away to avoid the risk of antibiotic-resistant bacteria. Yet the reality is that most “antibiotic-free” products come from the very same industrial confinement farming systems as conventional meat, eggs or dairy. The only difference is that the farmers are effectively being paid to withhold essential medical treatments (or risk losing their premium market). It doesn’t take a rocket scientist to guess the poor welfare and unnecessary suffering this well-meaning-but-ill-informed label has caused.

Even the trusted “organic” label is on the ropes. The influence of industrial agriculture and its lobbyists (aka “Big Ag”) continues to confound the desire of more principled players to incorporate genuine rules to protect and enhance welfare for organic animals, while antiquated rules mean that organic farmers avoid using antibiotics to treat sick animals for fear of losing their organic status.

Why is this relevant?

Nearly all of these food claims started from a place of promise, with a genuine desire to affect change. Yet none of them have actually delivered. Most have been concocted or eventually co-opted by industry into nothing more than meaningless, money-making scams.

“Organic” is just about hanging on in there, especially for the many thousands of independent farmers out there who sell directly to a trusting public day in, day out. But the reality is that most of the ‘organic’ food and big brands you’ll find the major supermarkets—and which now dominate the organic market—will have come from vast, barren monocultures or sprawling greenhouse cities that suck entire aquifers dry, or confinement livestock operations where animals are fed an ‘organic’ diet but given an area equivalent to a postage stamp for ‘outdoor access.’ As the independent organic farmers who live by the organic principles are slowly priced out of business, I fear the organic label will soon end up as meaningless and soulless as the others.

What does all this have to do with regenerative farming?

As Winston Churchill said in 1948, “Those who fail to learn from history are condemned to repeat it.” The use of the word “regenerative” is now rampant at food shows; the new buzzword in all the environmental and climate change community circles and a hot promise from large companies. I ask what it means and I receive countless variations, all very different and all rather vague. If regenerative farming is ever to achieve its true potential, history warns us that we must legally define, validate and confirm that the farming systems being promoted under the word truly are regenerative.

Regenerative validation must confirm actual progress for the individual farm towards building healthy, biologically diverse soils that grow healthy food while also enhancing the environment—and the livelihoods of the farmers concerned. Regenerative programmes must be accessible for all and not simply an elite club for those who feel they are already there, supplying food only to those who can afford it.

We know well-managed certification programmes can lead to genuine reform in agricultural systems. Although far from perfect, you only have to look at the transformative social and environmental changes achieved in modern coffee and banana production through certification to see what is possible. But just as soon as we stop the validation process, the potential for abuse creeps back. Some may say it’s human nature. I’d like to think otherwise. There is indeed possibility for long-term, sustainable and positive change. When it comes to regenerative farming, the argument for a coming together of likeminded individuals and organisations to set clear standards and procedures for validation by inspection is now overwhelming; the urgency irrefutable.

If we fail, we will not only have handed yet another gift to the marketing ‘greenwashers’; we will have wasted what may be the last opportunity to rebuild our soils, restore and protect our waterways, ensure the highest levels of animal welfare and achieve fairness for both farmer and consumer. Unless we can come together to identify and agree objectives, and a united strategy where we all play our part, we are destined to fail. And in light of the global challenges we now face, the ramifications of our collective failure for life as most of us know it are simply unthinkable.