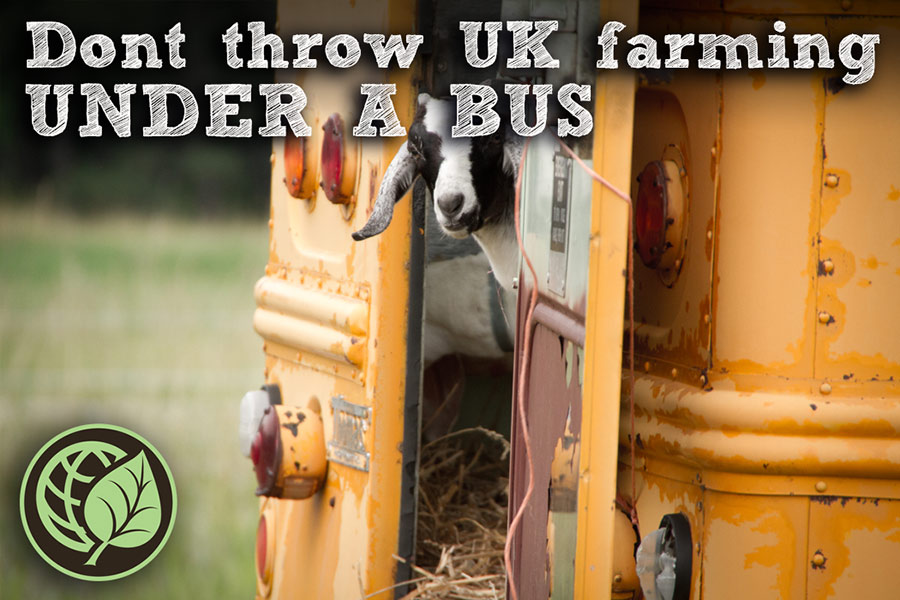 Fears are growing that UK food safeguards could be ‘traded away’ as part of a much-prized post-Brexit U.S. trade deal with Donald Trump, exposing consumers to imported chlorine-washed chicken, hormone-raised beef, battery cage eggs and GM crops—and threatening the livelihood of thousands of UK farming families.

A recent report in The Independent warns that Boris Johnson is planning a “quickfire US trade deal after Brexit that would slash UK food standards by stripping out protections imposed by Parliament earlier this year.”

Kierra Box, Brexit spokesperson at Friends of the Earth, told The Independent that U.S. trade negotiators have made it all too clear that access to UK markets for U.S. agricultural goods is a top—and non-negotiable—priority: “It appears from comments made by Liz Truss [the trade secretary], Boris Johnson and others in cabinet that they see Brexit as a deregulatory exercise. They see a U.S. trade deal as the core aim of leaving the EU, despite the level of opposition in parliament and in society to Brexit leading to dirty trade deals and deregulation.”

But why should anyone care? After all, surely this will mean cheaper food on the supermarket shelves?

Yet British consumers, farmers and anyone who cares about human health, animal welfare and the environment should be asking serious questions about the real costs of so-called “cheap,” sub-standard food imports—food that would currently be illegal to produce and sell here in the UK.

So what’s wrong with hormone-treated beef or chlorine-washed chicken? Why should we be concerned about the overuse of antibiotics in U.S. food animal production?

Producers in the U.S. and Canada are allowed to use synthetic hormones to boost muscle growth in cattle, but the meat from these animals has been banned from sale in the UK and across the European Union since 1989. Why? EU scientists argue that at least one of the hormones routinely used in U.S. beef production is a cancer risk, and that there is not enough evidence to show that five other commonly used hormones are safe to use. But the U.S. government and beef industry have long argued that hormone-treated beef is perfectly safe, resulting in one of the world’s longest running international trade disputes.

Chlorine washing is widely used in the USA to disinfect meat after processing. But critics argue that chlorine washing is simply a way for the U.S. food industry to minimise costs and compensate for lower production standards and slaughtering/processing systems with poorer hygiene standards than we currently require in the UK.

Most food safety experts believe the best way to eliminate the risk of salmonella and other food poisoning bacteria is to ensure the best farming and food production/processing standards in the first place, and that cutting food safety corners in this way has very real human health costs. According to Sustain, the alliance for better food and farming, the percentage of people who fall ill with food poisoning each year is up to 10 times higher in the U.S. than the UK, with higher rates of deaths from foodborne illness than in the UK, too.

It’s also widely acknowledged that the overuse of antibiotics in U.S. intensive food animal production is directly contributing to the emergence of antibiotic-resistant strains of bacteria, which England’s Chief Medical Officer, Professor Dame Sally Davies, described as a “catastrophic threat” to human health that may be “as important as climate change for the world”. We know that U.S. farmers use more antibiotics per pound of meat produced than any other nation in the world. A staggering 80 percent of all the antibiotics produced in the U.S. are used on food-producing animals to suppress diseases that would inevitably spread in the confined, dirty and stressful conditions of intensive livestock operations. A Greener World has long campaigned against the routine abuse of these most precious, life-saving medicines in food animal production in North America and beyond.

British farmers are also right to worry about the threat of unfair competition from food imports from the U.S. and elsewhere that are produced to lower animal welfare, food safety and environmental standards than required in the UK. Minette Batters, President of the National Farmers Union, is very concerned about the potential impact on UK farming from lower-standard imports and argues that British farming standards must not be sacrificed in any future U.S. trade deal. “It comes as no surprise that the USA is seeking comprehensive access to the UK’s agricultural market and is pushing for a trade deal that accepts U.S. production standards and practices,” she recently said. “It is imperative that any future trade deals, including a possible deal with the USA, do not allow the imports of food produced to lower standards than those required of British farmers.”

Only today, Minette Batters has warned British consumers that imported eggs from battery hens in the U.S. and elsewhere will return to our supermarket shelves if the government fails to strike a new trading deal with the EU and crashes out of the bloc. “We will be importing eggs produced in those very same cages we banned in 2012,” she says. Is this really what the caring British public want?

I’ve worked in UK farming and farm certification for more than 20 years and I have met few—if any—farmers who would relish the idea of further intensifying our livestock systems and compromising existing welfare or environmental standards to compete with food imports. I wonder how many of our farmers would rather give up when faced with the choice of being undercut like this? We need not look further than our colleagues across the pond: independent farmers in the U.S. are struggling desperately to achieve what we seem set to lose–sustainable markets with high standards independent of corporate agribusiness. Over the last few decades, hundreds of thousands of independent farms in the U.S. have been put out of business by “Big Ag” and the dynamic of economies of scale. If we follow a similar route here in the UK, the British countryside and its social fabric could look radically different in the not too distant future.

Of course, we must be careful not to tar all U.S. farmers with the same brush, and recognize that farmers everywhere are subject to the whims, demands, but also opportunities of the market. Just like here in the UK, not all U.S. producers raise animals in the kind of industrial feedlots or intensive indoor systems that we increasingly hear about in the media. It might also surprise you to know that A Greener World is working with thousands of farmers and ranchers across North America and in South Africa who raise their animals using high-welfare, sustainable farming practices, and provide all the evidence we need that there is a genuine, sustainable alternative model to industrial farming.

So let’s not all shuffle quietly towards the intensification and commoditization of UK farming. There is far too much at stake for the British public and farmers alike–and globally. We are talking about the very future of our collective health and environment, as well as the way we raise our farm animals, not to mention our food culture and landscape. I, for one, am not willing to give up without a fight.

Wayne Copp farms beef cattle and sheep on 700 acres in North Devon, and is Executive Director of A Greener World UK. Building on the success of our certification programmes globally, A Greener World UK identifies, audits, certifies and promotes practical, sustainable farming systems by supporting farmers and ranchers and informing consumers. Visit agreenerworld.org.uk