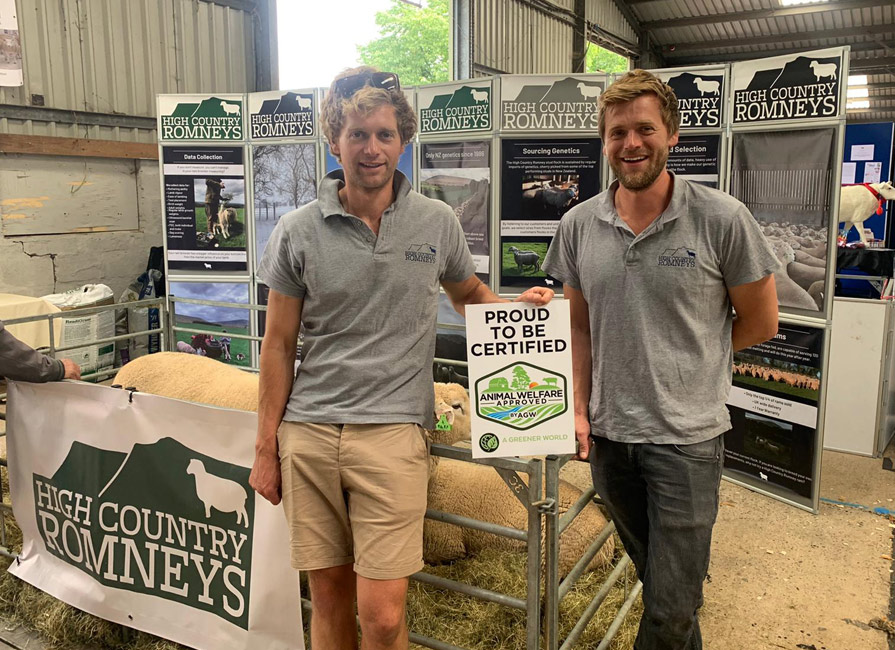 This summer saw the return of the agricultural show circuit in earnest. After two years of cancellations and uncertainty due to Covid restrictions, the AGW team was really looking forward to getting out and about again this summer.

I was excited to represent A Greener World UK at the 2022 National Sheep Association’s Sheep Show in late July at the Three Counties Showground, just outside Malvern, which was opening its gates for the first time in four years. With an interesting programme, near perfect weather, and a buzzing family atmosphere from the outset, it was the ideal opportunity to meet up with old faces and new, and to get the low down on the state of play in the sheep industry.

Meeting up with AGW Certified farmers

First call was to meet up with Sam and Will Sawday of newly AGW-certified High Country Romneys in Herefordshire, who were promoting their Certified AWA and Certified Grassfed NZ Romney and Romnex genetics (pictured above). I also had a chat with a very busy Andy Wear of AGW-certified Fernhill Farm up on the Mendip Hills in Somerset, who was hosting hand-shearing workshops. And it was good to finally catch up with Rollo Deutsch, the NSA’s next generation ambassador and AGW-certified, who was speaking at the ‘Sheep farmers – a force for social good’ seminar.

Talking of seminars, the ‘Where is the balance between our diverse market opportunities?’ session was excellent. Chaired by the NSA’s Dan Phipps, with Nicholas Jolly of Beef & Lamb New Zealand, Phil Hadley of the AHDB, and Mike Gooding of the RCMG, it was one of the most timely and relevant discussions I’ve heard in a long time. Mike Gooding made two outstanding points that really captured the moment and stuck in my mind.

First, Mike said that the industry needs to get on “the educational ladder,” and that “we need to educate not criticise.” This applies when we are debating within our ranks just as much as when we are talking to the public, he added. It’s a very powerful point as the agricultural community as a whole faces a time of huge change and uncertainty, and where some family businesses might not survive. (More on that later.)

Second, Mike said that “carbon has hijacked the sustainability movement,” and that there are “many other important things we need to also focus on.” It is clear the emerging farm carbon ‘market’ is a minefield, and we should all tread carefully until the future is clearer. But Mike’s wider point is that the rush to sell carbon offsets also risks overshadowing all the other important social and environmental issues that farming can (and needs to) address. At A Greener World, we’ve long argued that it is a huge mistake to look at farming through a single lens or to favour one particular metric over another. Very good points indeed.

The afternoon session on ‘Implementing radical change to meet future sheep farming challenges’ was equally thought-provoking, with Wiltshire Horn sheep breeder Tim White warning that the future is already “written in black and white”… He said that there “will be casualties with subsidies going, and if you’re not looking at what you’re doing, you’ll be one of those casualties.”

Tim added that health and welfare will be a “top priority in the future” and that retailers and the public won’t accept mutilations like tail docking. “We need to be providing what customers want,” he said. “We need to listen to and engage with the consumer.” It’s no longer good enough to say we are the best: “We have to show with data and certification that we are the best.” It’s a view that we wholeheartedly agree with. In a post-Brexit world, trusted farm certifications like ours will become increasingly important, particularly as consumers seek out British meat, dairy, eggs, cereals, fruit and veg, and make ‘better’ food choices.

Overall, the National Sheep Event was very rewarding and well worth attending in both a professional capacity, and as a sheep farmer myself. With the highly relevant seminars and forthright discussions on regenerative farming and the role of sheep farming in an uncertain future, it feels like the National Sheep Association is moving with the times.

You are hiking in the woods with a friend when a bear attacks. How fast…